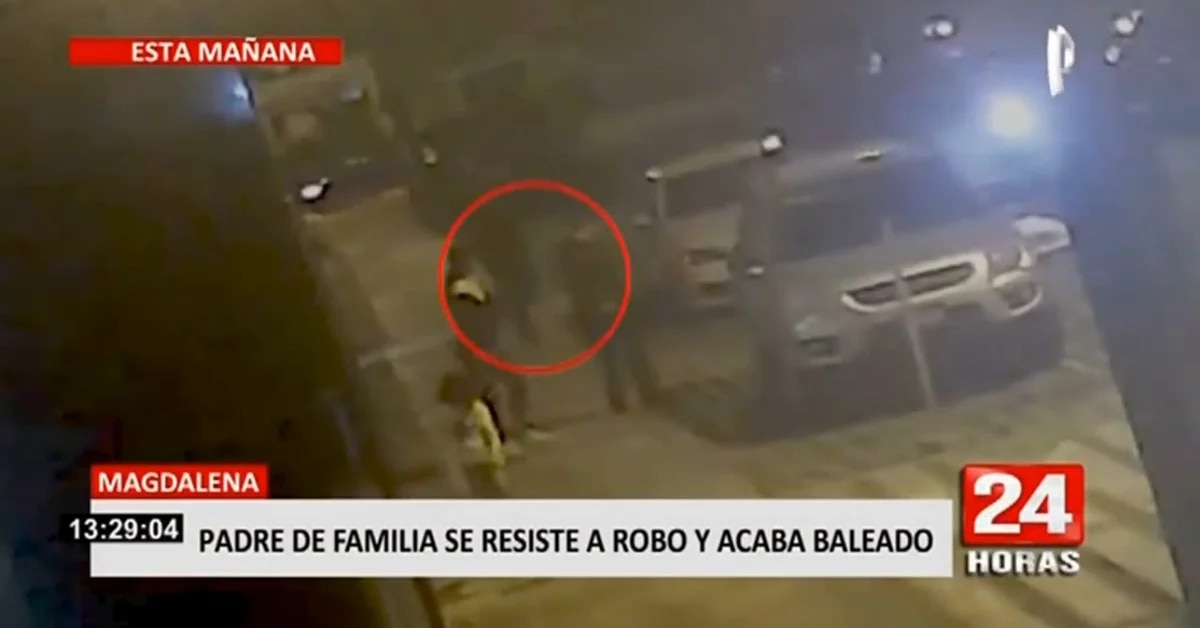 A father of a family, for resisting a robbery at night, was shot in Magdalena. The incident occurred near the headquarters of the National Society of Mining, Oil and Energy. Video: Pan American Television.

In block 6 of Francisco Graña, in the district of Magdalena del Mar, a shooting where a father of a family received gunshot wounds for resisting the robbery. The man was being cornered at night. It was placed on the bars of the facade of the National Society of Mining, Petroleum and Energy. According to 24 Hours, the neighbors demand a greater police presence because there have been constant robberies.

A neighbor commented that they have seen from robberies of vans to assaults on neighbors. “In less than 20 days we have two criminal acts, even yesterday with weapons”, told a neighbor in the middle. According to the security cameras, the moment in which the criminals shoot at the father is observed while his wife along with his son fled away from the scene of the events for safety. Out of fright, the woman grabs the little boy to keep him away from the area while in the distance she sees how her husband is shot. The criminals fled on a motorcycle.

“We have already received two incidents on Francisco Graña avenue. The first was on January 4, a red vehicle was stolen on the corner of this avenue. Yesterday around eight o’clock at night where there was a shooting “, declared a neighbor about the facts.

On the other hand, other neighbors commented that hours later a patrol from San Isidro approached, but not from the district itself. “There has been a child involved in yesterday and there have been two assaults in a few days”another neighbor said. She added that there is not much surveillance, not even at the security booths.

MAYOR OF MIRAFLORES MAKES A REQUEST TO CONGRESS

A few days ago, Luis Molina, mayor of Miraflores, urged the Congress of the republic to approve the law that prohibits the circulation of linear motorcycles with two occupants. The purpose of this would be to prevent the assaults and cases of hired assassins that are committed in these transports. He recalled that in 2019 he presented a legislative initiative to impose restrictions on the circulation of linear motorcycles, but it was filed.

Thus, he stated that the Municipality of Miraflores will continue to carry out operations against crime due to the increase in motorcycle thefts. But he stressed that Congress has the tools to combat citizen insecurity and reduce linear motorcycle crime.

For this reason, on Monday, January 17, he reported that he met with the president of the Commission for National Defense and Internal Order of Parliament, William Zapata. “I have explained to him what the project consists of. He (Zapata) has promised to get it out yes or yes as soon as possible”, he explained in statements to the Andina agency.

The mayor also specified that between January and December 2021, 526 people were murdered in Metropolitan Lima and a large percentage of these crimes were committed by criminals on linear motorcycles.

Along the same lines, he congratulated the Minister of the Interior, Avelino Guillén, for evaluating declare an emergency Metropolitan Lima due to the high crime rate. In addition, he welcomed the fact that provisions are being evaluated to prevent two people from traveling on the same linear motorcycle.

VES: man is the victim of the theft of his truck valued at 60 thousand soles at the door of his home
65-year-old man suffers assault and criminals take 10 thousand soles in Independencia
Artisan suffers the theft of his bicycle and valuables in a place that is close to Congress
Independence: man was hired as a cook in a chifa, but a few days later the television and money were stolen from the premises