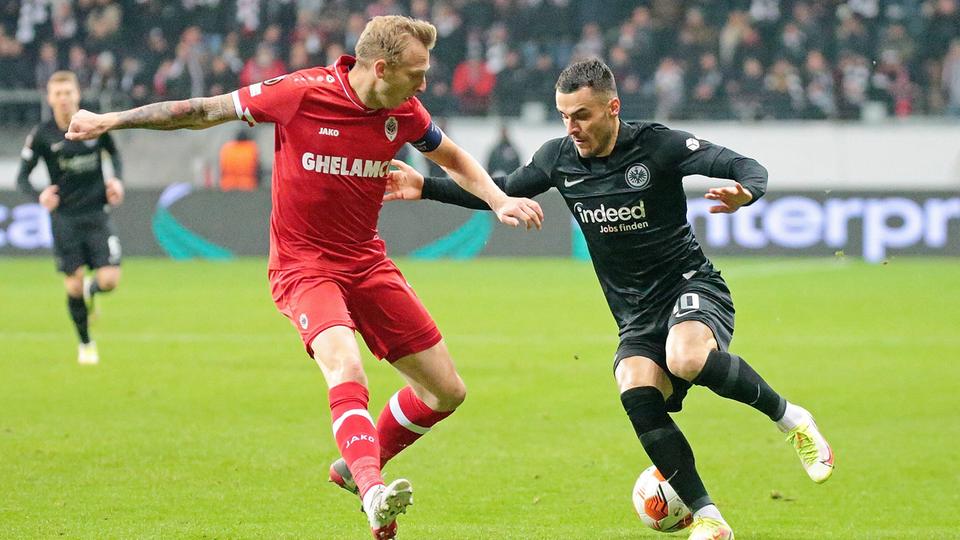 A wild draw is not enough: Eintracht Frankfurt missed the early knockout round in the Europa League. The Hessians played a draw against Antwerp – because Goncalo Paciencia still scored in stoppage time.

Eintracht Frankfurt missed the early round of 16 qualification. The Hessians only played 2: 2 (1: 1) against fourth-placed Royal Antwerp on Thursday and were even lucky because Goncalo Paciencia’s last goal came in stoppage time. Daichi Kamada (13th), Radja Nainggolan (33rd) and Mbwana Samatta (89th) had previously met.

Compared to the Freiburg game, the Hessians started not only unchanged in terms of personnel – but also in a playful way. In the initial phase, the Frankfurt team combined cheerfully forward, mastering the ball and the opponent. The reward for this lively style of play followed early: after 13 minutes it was 1-0 for Eintracht.

Tuta intercepted a bad pass from the guests and served Timothy Chandler, who in turn found Kamada with an accurate cross. The Japanese maneuvered the ball directly into the Belgian goal – a goal worth seeing. Even after that, Eintracht continued to determine the game, but from this point on it got bogged down more and more in their offensive actions.

Not much came from the opponent from Antwerp either. All the more surprising that it was 1: 1 in the 33rd minute. After a corner, Nainggolan pulled directly and, with the help of the deflecting Evan N’Dicka, scored a somewhat surprising equalizer. Eintracht tried again before the break, but Rafael Borré missed the best opportunity (45th).

At Eintracht you also noticed at the beginning of the second section where the Frankfurt shoe pinches. The Hessians had a lot of possession, always managed to establish themselves in the Antwerp half, but hardly created any chances there. Any pass, any run – something was always wrong.

The game flattened out more and more. It was only Filip Kostic who shot a long-range warning again (65th). Shortly afterwards there was a brief moment of shock when a firecracker exploded behind the goal of Antwerp goalkeeper Jean Butez. After an interruption, however, it could continue.

Paciencia scores just before the end

However, Eintracht was finally out of this game – and was really lucky in the 71st minute. Richie de Laet allegedly scored to lead the Belgians after a free kick, but was a few centimeters offside. But not in the 89th minute. Eintracht could be countered in their own stadium and Samatta scored to 2-1.

But that was not the end of this game. With a last act of will, the Hessians managed to equalize in stoppage time. Paciencia headed for a Kostic cross. Thus, one point at Fenerbahce Istanbul is enough for Eintracht to win the group on the last day of the group. But if the Hessians lose and Piraeus win at the same time, the Frankfurters would have to take the detour via the intermediate round.