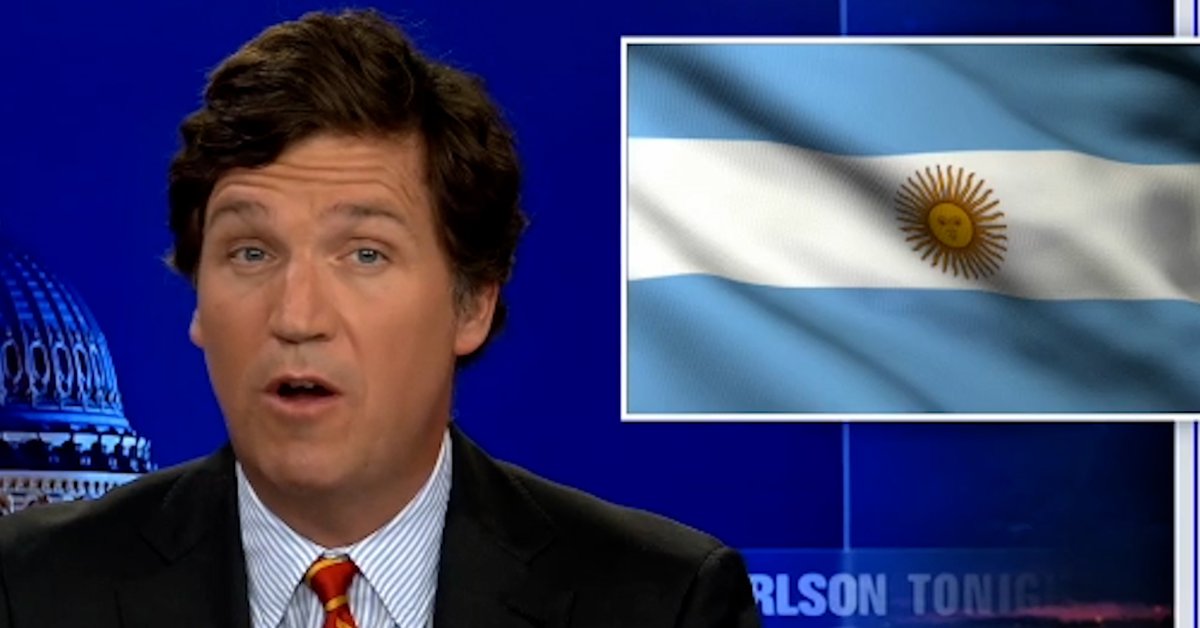 Argentina’s proposal to exchange climate actions for the debt contracted with the International Monetary Fund reached prime time on television in the United States. The conservative journalist Tucker Carlson, one of the stars of the Fox News network, addressed the issue on his November 9 show.

Carlson is one of the most widely watched political analysts – three million people follow him every night. He has his own style, with acid and ironic comments that tend to generate controversy. This time, his target was Argentina and an idea that President Alberto Fernández has repeated in his latest speeches in international forums.

I read a funny article on Bloomberg the other day. Argentina has apparently offered to pay its creditors with something called “climate action.”

Several years ago, Argentina defaulted on a $ 46 billion debt with the International Monetary Fund. Now, the country’s president has proposed linking the payment of that debt with “essential investments in green infrastructure.” In other words, building things in your own country, but for the right reasons. So suddenly worrying about global warming is kind of like legal tender. If you care enough, you can pay off your debts with him.

Now our most cynical viewers will probably snicker at this. “Wow, Argentina”, you might think. “That’s original, I respect your play.” And yes, it is impressive in the style of a gipsy gypsy gambler playing trilling for money. Argentina does have lip service.

But there’s no reason why you can’t get in on the action too. The fact that it is not a bankrupt Latin American country does not mean that it cannot pay its debts with virtue. So how about this? The rest of us will commit to legally binding notarized contracts not to fly our private jets to Europe for an entire calendar year. In exchange for that promise, we are exempt from federal taxes. It will not be easy. Try to go to Florence by coach.

On the other hand, it will put us way ahead of Joe Biden and Jeff Bezos and Al Gore and everyone else, and the sacrifices we are willing to make for this fast-melting planet, as opposed to our leaders who sincerely care about the climate crisis and apparently that is worth real money.

Alberto Fernandez He explained his idea recently at the Climate Change Summit (COP26) held in Scotland. “We promote the debt swap for climate action. We need to design payment mechanisms for eco-systemic services and install the concept of environmental debt ”, raised in Glasgow.

Fernández’s proposal to use the IMF as a multilateral body that supports future environmental projects does not end in suggesting that it accept to exchange debt from poor and middle-income countries. He also suggested – during his speech – that the IMF’s Special Drawing Rights (SDRs) can be used to meet the goals of the Paris Agreement in the worst hit areas on the planet.

“I call for us to be able to advance in an effective instrument that allows us to channel Special Drawing Rights (SDRs) for sustainable development. In the case of Latin America and the Caribbean, the channeling of these resources to the regional development bank is key to leverage the technological transition necessary to reverse a worrying dynamic that is now evident to all, ”he said.

Argentina owes more than USD40 billion to the IMF from the loan granted during the government of Mauricio Macri. The government needs an agreement that allows it to reschedule next year’s payments and not default. In all of 2022, the country must pay almost USD20 billion, a whopping impossible to assume for local accounts. The first of these payments must be made in March, the deadline to close an understanding with the multilateral credit organization.

The president of YPF denied that fuels will increase in December

Tourist boom: which are the most chosen destinations for the next long weekend in November