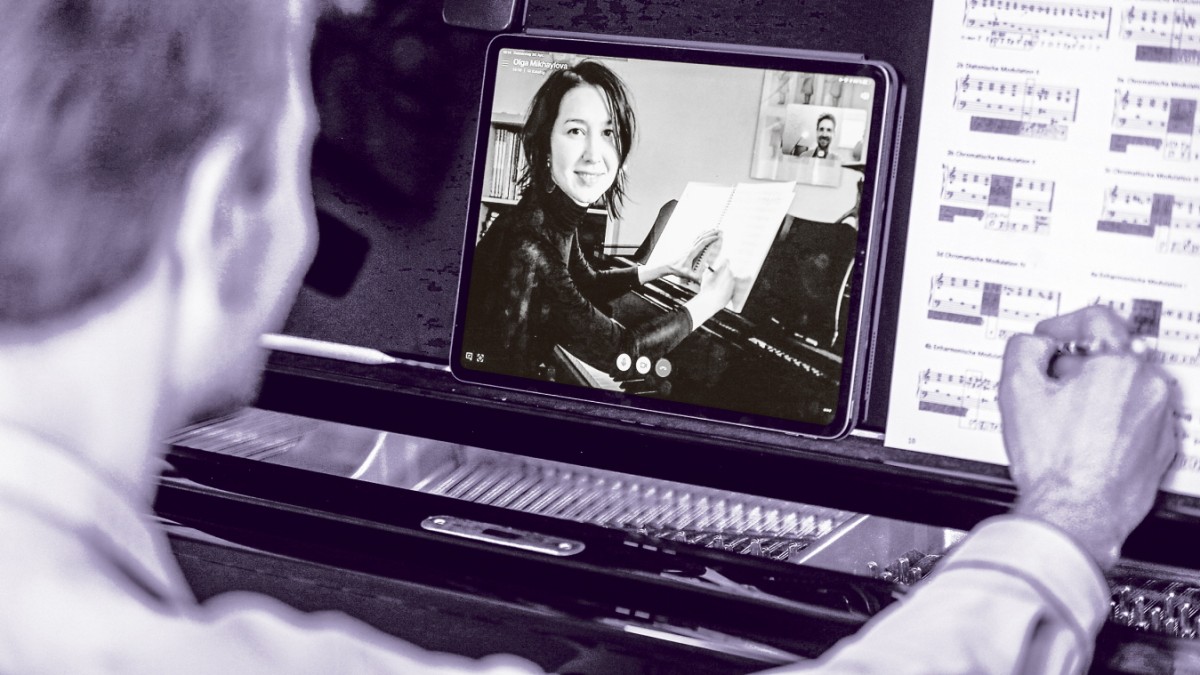 For a while, Florin Emhardt needed a special permit to rehearse with his guitar ensemble. Examination appearances had to take place in small casts; Lecture evenings were canceled. His graduation was delayed due to the corona crisis. Similar to Emhardt, who studies school music with a focus on jazz and pop as well as classical guitar in Trossingen, the situation is around 17,000 students at Germany’s state music academies. The current winter semester is already the fourth semester in which future cellists, church musicians, sound engineers, conductors and composers can only study to a limited extent.

Anyone who wants to become a music professional in this country prefers a state institution; there are few private institutions at the same level. The pandemic has also caused a major boost to digitization at the 24 state music colleges in Germany. You will try out concepts from the areas of blended learning, e-learning and distance learning. Video conferences are being designed with even more modern technology, and new learning platforms are being developed.

The Lübeck University of Music with around 380 students shows what innovation potential smaller institutions can develop. The “Virtual MHL” started here in April 2020. Podcasts and webinars, online lessons and exercise formats for the home made it possible to continue teaching in lockdown. In order to professionalize the online offers, a new position for digital teaching has been set up. “At the beginning, the Virtual MHL was only an emergency solution,” says the Lübeck composition student Benjamin Janisch. “Over time, however, it has been shown that it can also open the door to new teaching opportunities.” Janisch particularly liked an online music history seminar in which Brahms expert Wolfgang Sandberger recorded his lectures on video and supplemented them with sound and image examples.

Janisch’s composition lessons can also take place without personal encounter. “First I send my work to the professor; the lessons then run via Zoom and Skype. This format works very well,” says the student. Professor Rico Gubler, President of the Lübeck University of Music, sums it up: “In many places, routine has now returned, even if the stress remains high.”

So far, the transition to new teaching formats has been the smoothest at those conservatoires that have already worked in the field of digital technologies. The relevant departments can now support the change on site. This happens, for example, in Trossingen, where the regional center for music design performance was founded ten years ago. In Detmold, the Center for Music and Film Informatics is involved in digital teaching. At the Berlin University of the Arts there is the “App Music” research center, which deals with the phenomenon of making music using apps on smartphones or tablets. Special apps can be used to make music with others, to compose, to try out new ways of making music or to manage music collections digitally.

One of the greatest challenges is moving instrumental or vocal lessons as well as subjects such as choir, chamber music and orchestra to the digital world. “The sound experience is always limited, the interaction is hardly possible due to the time delay,” says Christiane Iven, professor for singing at the University of Music and Theater in Munich. “Among other things, teachers and students often lack hardware, software, technical knowledge and a fast internet connection. For me, digital artistic individual lessons remain an emergency solution.” Benjamin Janisch, a composition student in Lübeck, is also critical in this regard. “When it came to piano, I noticed that important aspects such as working on sound or body tension couldn’t be conveyed well through online portals,” he says.

Oliver Krämer, Professor of Music Education at the Rostock University of Music and Drama, has shown in a progress study that lecturers and students of musical subjects have considerable concerns about digital teaching formats. Together with his colleague Helen Hammerich, he interviewed around 800 teachers and 800 students from 16 music colleges in Germany and Austria. “64 percent of the students are hoping for relief through more flexible time management and independence from the university location,” says Krämer. “However, in the artistic field, a quarter of the teachers and even 35 percent of the students reject online teaching as unsuitable. 58 percent of the teachers state that online teaching has led to a loss of substance.”

“In the meantime, the digital concert grand has found its way into some piano departments, which transfers the student’s keystrokes to the teacher’s instrument without delay. Drawings, symbols or audios. The comments in the dialogue between musicians and their fellow students and teachers should be accurate to the second so that one knows which part of the musical interpretation is at issue. Research projects are also ongoing on ensemble play in digital space; learning platforms for Music theory are designed.

“Some of the digital formats have developed well,” notes Florin Emhardt, a student from Trossingen. “However, the effort involved in studying has increased. It costs a lot more self-discipline to practice alone at home or to do homework.” In the future, teaching at conservatoires will likely be a mix of self-study, digital learning support and face-to-face hours. “The streaming offers will again decline strongly in favor of face-to-face concerts”, suspects Rico Gubler, President of the Lübeck University of Music. “Nevertheless, the competence to record music for streaming will continue to be taught and will be given a new place in addition to live performance training.”

The fact that digital formats will establish themselves makes the course of studies more flexible, but at the same time is likely to increase social inequality among students. “Anyone who has a family, has to work alongside their studies or cannot easily afford the digital equipment is left behind more quickly,” says Rostock-based professor Oliver Krämer.

The number of applicants for musical courses has so far remained stable despite Corona. “The applicants first sent in a video for assessment and then put their skills to the test in a video conference,” says Oliver Krämer. “Overall, that went better than those involved initially expected.” In his survey, Krämer found that almost half of the teachers and a third of the students believe that the aptitude tests will continue to be at least partially digital in the future.

The universities support their students in terms of career planning

How will future music makers fare when they finally have their exams under their belts? “We are all worried about how our musical life will continue in the next few years. The job situation will probably be even more difficult,” says vocal professor Christiane Iven. She assumes that the trend towards a “professional patchwork existence” will increase. “You are not only active as a soloist, but also in fields such as teaching or music management. Many students are on the lookout for a plan B and want to broaden their careers,” says Iven.

Accordingly, the conservatoires are expanding their career planning offerings, cooperating with coaches and further training providers in order to prepare their graduates as best as possible for the world of work. “In the areas of music business and career planning, we have initiated various collaborations in order to offer digital formats at several universities”, explains the Lübeck University President Rico Gubler. “The knowledge in this area can be well prepared in podcasts, which can be processed asynchronously by the students.”

In any case, music student Florin Emhardt from Trossingen relies on several pillars for his professional future: He can imagine an artistic career with his experimental guitar ensemble as well as an educational activity.